Studies of the methods of synthesizing and modifying of the tricyclic quinazoline alkaloids have allowed us to develop simple, convenient methods for the preparation of alkaloids (deoxypeganine, deoxyvasicinone, mackinazoline, mackinazolinone, etc.) contained in the Peganum harmala, Mackinlaya subulata Philipson plants, their thiophene, pyridine analogues, and their homologues. The creation of an easy-to-implement method for the synthesis of deoxypeganine hydrochloride contributed to an economically advantageous method of obtaining a synthetic drug and introducing it into medical practice. By this method, besides of deoxypeganine and deoxyvasicinone, were obtained their six-, seven-, eight-membered analogues, derivatives and homologs.

It was revealed that the reaction of tricyclic quinazoline alkaloids with electrophilyc agents can be directed to all potential reaction centers. In this case, complex compounds are formed according to N-1 (sulfotrioxides, perbromide of the hydrobromides), a-mono- and a,a-dibromo derivatives, and the products of formylation of the methylene group at the a-carbon atom. Their alkylation proceeds anomaly with the formation of a-alkyl (benzyl) deoxyvasicinone with simultaneous cleavage of the formyl residue. The development of such an alkylation method made it possible to obtain hard-to-obtain a-substituted deoxypeganines.

The study of the reactions of electrophilic reagents with tricyclic quinazoline derivatives (together with the University of Sheffield) for the first time showed the possibility of creating an optically active center for these derivatives using chiral catalysts. Some optically pure enantiomers have been obtained that cannot be obtained by other methods. For the first time the synthesis of substituted 2,3-trimethylene-3,4-dihydroquinazolines having two chiral centers has been carried out.

Methods of the formation of C-C bonds have been developed in a series of tricyclic quinazolines, their substitutions (bromine, nitro, amino, acetylamino, benzoylamino) by interaction with carbonyl compounds (aromatic, heterocyclic, aliphatic aldehydes, ketones, formamides, acid chlorides).

The widespread use of X-ray methods of analyses to establish the molecular structures of tricyclic quinazoline bases has led to the discovery of salt complexes, solvates, and co-crystals. Studying the structures of alkaloids of deoxypeganine, deoxyvasicinone, mackinazoline, mackinazolinone, their substituted and homologues, it was shown that one of the nitrogen atoms in position 1 or 3 can undergo protonation (alkylation). However, as in the case of neutral molecules, the length of bonds N1=C2 and C2-N3 should deviate from the usual single and double bond lengths. This hypothesis was confirmed by X-ray analysis.

A new oxidative cyclocondensation reaction of 2-thioxo, -selenoxopyrimidinones, their annelated with the benzene and thiophenic rings of their analogs, resulting in symmetric and asymmetrical condensed 1,2,4-thiadiazoles, was discovered. The possibility and sphere of using of this reaction for five-, six-membered thio-, selenoamides, their analogues condensed with a benzene ring, as well as non-cyclic thio- and selenoamides are shown.

By condensation of o-phenylenediamine, anthranilic acid with acyl cyanamides were synthesized 2-acylaminobenzimidazoles, 2-acyl (alkoxycarbonyl) aminoquinazolones-4. Their interaction, as well as tricyclic quinazoline alkaloids with electrophilic reagents, addition to unsaturated acids, aldehydes and other chemical transformations, was studied. On the basis of these compounds, highly effective drugs were created against of cotton wilt and in the fight against root and cotton plant gummosis - fungicides Olgin, CMAQ (carbomethoxyamino quinazoline), bactericidal Nicamolone, allowed for use. Recommended for agriculture plant growth stimulants Rosalin, Tetranil, FMK, TFYN.

The multistage synthesis of fungicides of Radomil, Karatan, anthelmintic drugs, Medamin, Albendazole, and etc. was carried out. The anthelmintic drug Quinazole and insecticide Termithocidepine are being developed for use in the fight against termites.

One of the achievements of the department of organic synthesis is the ipso-substitution of the methyl group of 5,6-dimethylthieno[2,3-d]pyrimidin-4-ones under the action of nitrating agents. It was shown that, depending on the nature of the substituents on the N-3 atom of the pyrimidine ring, the reaction proceeds in two directions: ipso-substitution of the methyl group by the nitro group or its oxidation to the carboxyl group.

Conducted research on the chemical modification of the quinolizidine alkaloid cytisine. Various N-acyl, alkyl derivatives containing thiadiazole, lactam and other cycles have been obtained. The stable Z- and E-conformations of N-chloroacetylcytisine were established as a result of rotational isomerism around the N12-C(O) amide bond.

A method for the synthesis of organometallic compounds of tricyclic quinazoline alkaloids and their derivatives containing the ferrocene molecule has been developed. Their redox properties and stereochemistry were studied. Taking into account the presence of several heteroatoms in the molecules of these compounds and the possibility of the formation of complexes with metals, their complexation with d-metals was studied and the types of formation with the participation of one or another center were determined.

Conducted interesting studies on the chemistry of unsaturated organophosphorus compounds. In order to study the patterns of the reaction of addition of nucleophilic agents, vinyl phosphonic acid esters were obtained, which required new approaches, i.e. use of phase transfer catalysts. In this way, the nucleophilic addition reaction was carried out.

One of the scientific directions is devoted to the study of the neutral substances of leaves of various varieties of cotton, differing among themselves in phenological characteristics and properties of autonomous growth regulation. These studies revealed polyisoprenoids in them: polyprenols, α-tocopherol, sterols, bombiprenones, glyceneprenols, and diols. Methods for isolating them from plant materials and methods of analysis using HPTLC, HPLC have been developed. The qualitative and quantitative compositions of secondary metabolites were studied during ontogenesis and depending on the place of plant growth.

As a result of the study of neutral compounds and polyprenols of plants of Malvaceae, Moraceae, Vitaceae and Platanaceae found their industrial raw materials. On the basis of polyprenols, plant growth stimulators Uchkun, approved for use in cotton growing and vegetable growing, and Pakhtaoy, have been created. A plant growth stimulator with the fungicidal property retkit and gossiprene feed concentrate for agricultural animals are also being developed.

Studies are underway to modify polyprenols in order to create drugs and dietary supplements for cosmetology.

Research papers of the employees were published in scientific articles, over 100 copyright certificates and patents were received.

According to the results of the work of the three laboratories, 8 doctoral and 106 candidate dissertations were defended. 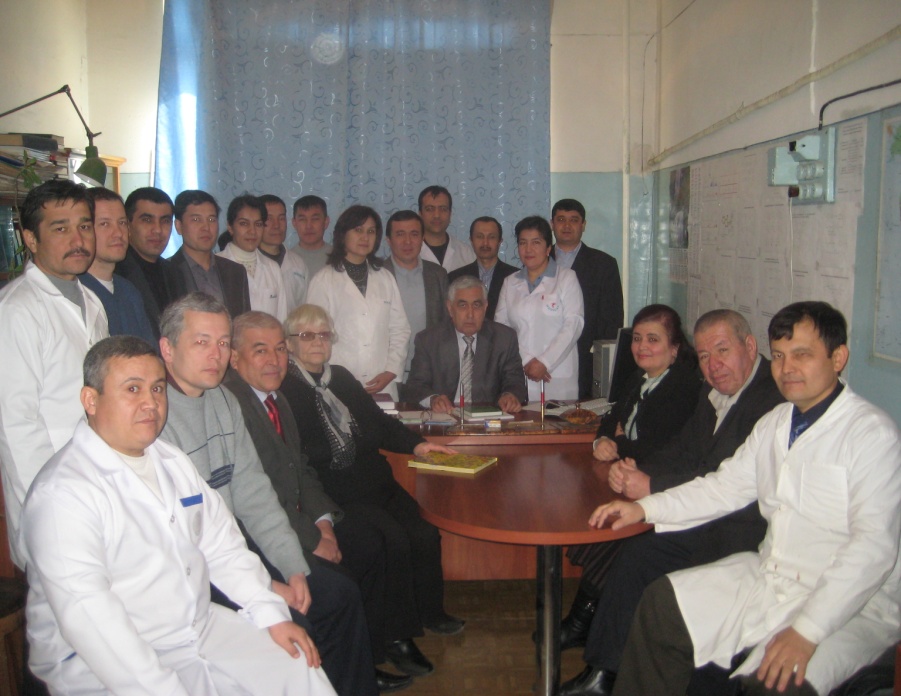 The collective of the Department of Organic Synthesis (2011)

2. Aliyev N.A. "Alkylation, acylation of heterocyclic and aromatic ambident amines and the synthesis of new pesticides based on them" (1985)

5. Yusupov M.M. "The study of the reaction of amides of trivalent phosphorus with carbonyl compounds" (1990)